In a first, and the new way of doing things, we had our 2020 GMM in a Zoom format on June 10! We had 34 members, including three from the US, joining the discussion. We share with you the highlights of the meeting.

UPERDFI welcomed 11 new members from the Philippines and 5 colleagues from the US, namely:

Dean Manegdeg cited that our College is celebrating its 110th year on June 13. With the COVID-19 situation, UP is reconfiguring the school year schedule and the instructional format. The AY 2020-21 will start on September 10, with a mix of online and classroom meetings. The traditional College Recognition Rites in the end of June will not be held. Graduation requirements of slated June 2020 graduates are extended to May 2021, but they will be on record as 2020 graduates.

With online courses, Dean cited the need to have laptops available for lending to about 1,800 and staff, out of 5,000 Engg students.

Some of the projects that were mounted in response to the Covid pandemic are ready for commercialization. Some of these were funded from the fund-raising that UPERDFI mounted. To have a lasting impact on society, clarity needs to be made with UP to understand IP rights and patents before serious discussions with investors/manufacturers can be started.

His message above summarizes the notable activities we undertook under his leadership.

On June 11, the Technical Advisory Panel held its 5th meeting to discuss the results generated by the project team led by Dr. Michael Pedrasa, formerly the Program Coordinator of the UP Energy Engineering Program and now EEEI Director. The TAP expressed thanks to the project Team for its painstaking and conscientious efforts for the past ten months. Thanks also to our Trustee Roger Buendia, who was our Project Manager. With final adjustments in the assumptions, the final report will be shared with target audiences, such as the Department of Energy and industry players. The TAP convenor is our former chairman Pete Maniego.

We express our thanks to the members of the TAP: UPERDFI members Cesar Buenaventura, Jerome Cainglet, Pete Maniego, Rene Sunico and Sonny Viray, and Joe Cruz, Wali del Mundo, Viking Logarta and Baste Quniones, Two others passed away and could not see the completion of the project: former UPERDFI Chairman Chito Francisco (died December 2019) and Obet Verzola (April 2020). May their souls rest in peace.

Thanks to Outgoing Trustees

The General Membership gave words of gratitude to Trustees who served their 3-year terms;

In addition, Rico Trinidad was recognized for his active role in the past two years, as VP and then President. He opted to resign as a Trustee with one year left in his term.

The Members elected the following to serve as Trustees: 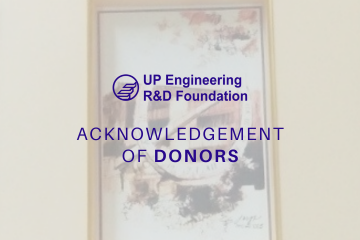 Helping UPCOE Students COPE, SUCCEED and EXCEL! Seeing the convergence of our goals, the Alvarez Foundation has set up a Scholarship Program effective AY 2021-22. They will provide benefits to two students for a 2-year Read more…

UP Mechanical Engineering Classes of 1979 to 1981 Spur Faculty Development

Following the online reunion of the ME alumni hosted by Dean Ferdinand Manegdeg on June 6, the Class of 1980 decided to pool their resources to set up The ME Class of 1980 Professorial Chair Read more… 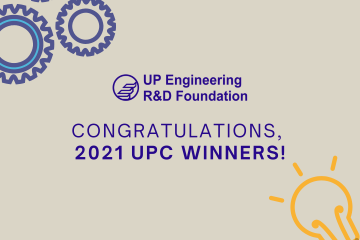 From the 30 projects from all the two Institutes and six Departments, 10 finalists were selected by the Undergraduate Project Competition Committee led by Prof. Gerald Denoga. These were included in the final judging held Read more…